This page chronicles the work to restore the Zion Baptist Church of Philadelphia “Zion Annex” and re-establish the Annex as a place that is a benefit to the immediate Nicetown-Tioga community and the city of Philadelphia at-large.
HISTORY
​Zion Baptist Church purchased Trinity Reformed Church in 1969 under the pastorate of the late civil rights leader Rev. Dr. Leon Sullivan. The building was built in 1911. It was renamed Zion Educational Annex. Highlights of some past programs offered in the building can be found here. The Annex was active until 2014 when it had to be closed due to the need for repairs. The building has remained vacant ever since.

REACTIVATING THE ANNEX
In April 2018, the Zion Annex was one of three sites selected for the Sacred Places/Civic Spaces initiative funded by the William Penn Foundation. The initiative was a partnership between the Community Design Collaborative and Partners for Sacred Places to re-envision underutilized, purpose-built religious properties as community hubs. Wharton-Wesley United Methodist Church (SW Philadelphia) and The Philadelphia Masjid (West Philadelphia) were the other sites chosen.

The initiative concluded in May 2019 with the issuing of a final report that included the proposed design for the redevelopment of the Annex based on community input.

REACTIVATION PROJECT TIMELINE
The remainder of this page will highlight project milestones presented in reverse chronological providing the most recent updates first.
MAY 2021 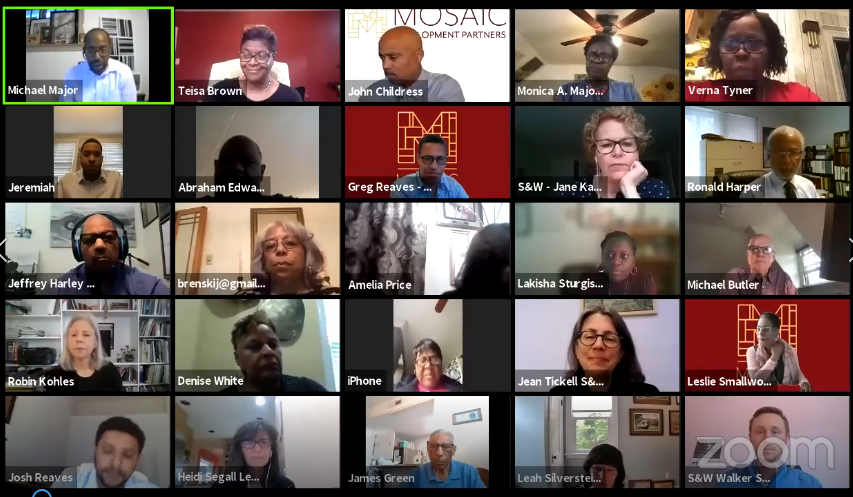 A Stakeholder/Community virtual meeting was held to confirm/update the community’s priorities as identified through the Sacred Places/Civic Spaces initiative in 2018
APRIL 2021
​Through a competitive selection process Schultz & Williams was chosen to conduct a capital campaign feasibility study.
FEBRUARY 2021
Through a competitive selection process Mosaic Development Partners was chosen to create the development plan for the Zion Annex.
JULY 2020
​William Penn Foundation awarded Zion Baptist Church a grant to help advance the project. The grant was to be used to hire two (2) consultants – a development consultant to create a development plan and a fundraising consultant to conduct a capital campaign feasibility study. The development plan includes identifying mission-aligned tenants, renovation costs, and a construction timeline. The feasibility study will determine how much capital can realistically be raised over the next three-to-five years. The study will also identify potential strategies and the infrastructure needed for implementing the capital campaign. ​
MAY  2019
The final report for the Sacred Places/Civic Spaces initiative was issued with the proposed design for the redevelopment of the Annex based on community input.
APRIL 2018